By Hannah Billingham
Is there a better way to spend two days than in the company of over two hundred talented writers? I’m not sure there is. Earlier this month, I was thrilled to gain an industry place and head to Leeds to attend the second festival of its kind, organised “by writers, for writers”, through the BBC’s Writersroom.

Another fantastic turnout for another top night…

A great big thank you to our two special guests: Andrew Ellard, Red Dwarf associate producer and IT Crowd script editor, who has possibly the best testimonial we’ve ever read (“I wish Andrew came as an app.” – Graham Linehan), and Paula Hines, who has just gone freelance after nearly a decade at the BBC, where she script edited shows like After You’ve Gone and The Smoking Room, and has amassed a wealth of excellent recommendations, herself. Both were incredibly friendly, open and knowledgeable - with an obvious, genuine love of scripts and comedy.

Thank you, too, to everybody who came along, for making it such a fun evening, including, Roland Moore, creator of BBC drama series, Land Girls, who is currently developing a comedy project; agent Holly Nicholson, from Noel Gay; Jamie Hewitt, development exec at Caveman Films; Adam Polonsky, development producer at Focus Films; Steven Russell, head of development at Loves Me Not Films; comedy writer and performer, Nathaniel Tapley; producer, Nana Hughes and script editor, Lauren Cushman. 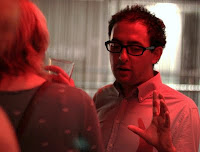 Thanks also to Eleanor Ball for her write-up of the night here. We are very pleased that the word is spreading about In Development – interest in this event was high, and we have more comedy development themed nights in the works.

As promised, you’ll now find screenwriter-slash-In Development photographer Jeremiah Quinn’s profile up on the site. We think he did a fine job, in the ‘romantically’-lit conditions of BFI’s Benugo bar. Thanks, Jeremiah!
We are looking forward to our next event at the end of this month, when film journalist, novelist and co-host of Film 2011, Danny Leigh and scriptwriter, novelist and former journalist, Jason Arnopp will be joining us to discuss combining the roles of Critic and Creative. How do we move between one end of the process and the other - and is it beneficial to do both? Invites to follow soon.
As ever, if you work in development, aren’t on our mailing list yet and would like to come along, please do get in touch!
Posted by In Development at 06:03 7 comments: