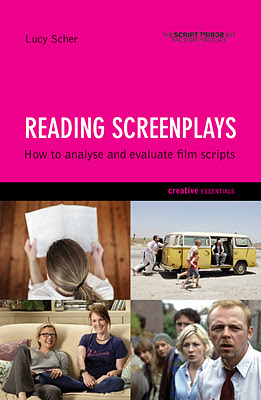 Exciting news from The Script Factory…
Back in 1999, Lucy Scher pioneered the first training course for script readers. Since then, The Script Factory has built a worldwide reputation for teaching workshops on how to effectively analyse screenplays.
The teaching has been constantly updated and evolved in line with industry practice over the last ten years and we are delighted to announce that all the research and thinking that Lucy and the rest of the Script Factory's training team have done has now culminated in a book.
Reading Screenplays, published by Kamera Books, offers a practical approach to evaluating scripts and assessing their potential as movie ideas.
With chapters on Storytelling and the Principles of Genre, Script Report Writing, Writing and Assessing Treatments and building a Career in Script Development, the book contains sample synopses and a script report, a useful list of resources and helpful ‘good reader’ tips from producers. It’s a great read and an invaluable companion for anyone involved in the script development process; equally useful as a guide for those who are new to script reading, and as a refresher for more seasoned developers.
Not only did Lucy conceive the UK’s first script reader training course, but she also developed the Script Factory and National Film and Television School’s Diploma in Script Development - the only comprehensive vocational programme in script development in the UK – out of which our group, In Development, was born. Lucy was also instrumental in helping us to launch this year, so we’re thrilled that she will be joining us as a special guest in early 2012. More details coming soon!
You can read more about the book from Lucy, here - and it’s available at a special offer price of £10, here.
Posted by In Development at 15:09