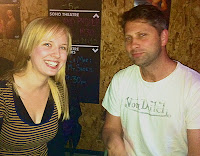 Last month we headed to the Soho Theatre bar, for a fun night of drinks and chat with acclaimed producer of comedy and drama, television and film, Charlie Hanson.

Charlie has over twenty years of experience in the industry, producing televison series including Birds of a Feather (BBC), Desmonds (Channel 4), Garth Marenghi’s Darkplace (Channel 4), Whites (BBC), Snuff Box (BBC – and just out on DVD in the USA!) and the Golden Globe winning Extras (HBO/BBC) – as well as the BAFTA-winning feature film A Way of Life and Ricky Gervais and Stephen Merchant’s Cemetery Junction (read his full profile here).

We got to hear all about Charlie’s work as a freelance producer and managing director of his own company, Tantrum Films – and the making of Life’s Too Short. If you missed the night, don’t worry, you can find out more about the show tonight (5th November) at 10.15pm on BBC2 (or catch up on the iPlayer)!

Members who came along included actor, Ronan Vibert, recently seen in Sky Atlantic’s The Borgias, and currently filming Hatfields & McCoys for the History Channel (and who worked with Charlie on Birds of a Feather); script reader and production coordinator, Laura Park, who has just finished work on the brand new episodes of Absolutely Fabulous; writers' agents, Simon Williamson and Janice Day; development producers May Gibson, Adam Polonsky and Avon Harpley; script editor Lauren Cushman; screenwriter and script consultant, Ellin Stein; comedy writer and performer, Nathaniel Tapley; writer and creator of BBC One drama Land Girls, Roland Moore (don't miss the third series, showing this week!) and writer/broadcaster (and former Karl Pilkington stand-in on Ricky Gervais and Stephen Merchant’s show, during her XFM days), Claire Sturgess. Thanks to Claire for whipping out her phone and taking photos on the night, as Jeremiah was unable to make it.

A huge thank you to everybody who came along, Soho Theatre for looking after us so well, and to Charlie, for being incredibly generous with his time, during a particularly busy period, and answering all of our questions!

Invites for this month's drinks - and our Christmas party! - will be in your inbox soon. If you're not on our mailing list and would like to join us, please get in touch.
Best wishes,
Hannah and Sarah x