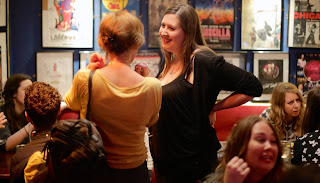 We’ve had a run of top, female, featured guests this year and that trend continues this month with twice BAFTA nominated producer and marketing and distribution expert, Mia Bays.

Mia produced feature music documentaries; BACKSTREET BOYS – SHOW EM WHAT YOU’RE MADE OF and SCOTT WALKER – 30 CENTURY MAN, as well as Oscar winning short SIX SHOOTER. She was creative producer on Film London’s Microwave scheme, working on fiction features including SHIFTY, LILTING and ILL MANORS. You can read more about her extensive experience on our profiles page. 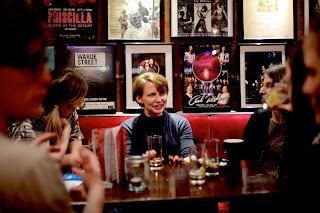 Our last drinks were a busy occasion as we took over much of the main bar at the Phoenix Artist Club.

A host of writers, directors, producers and development people kept up the lively discussion. With new members always joining us, long may our development drinks continue as a great monthly place to catch up with friends and colleagues and find new contacts, collaborators and advisors.

Thanks to all our guests and to Jeremiah Quinn for the photos.

And if you’re up for more networking and discussion on the subject of screenwriting and development, don’t forget The London Screenwriters’ Festival comes early this year running on 2nd - 4th September. There are also a number of additional events in the week running up to the festival. As always, you can get a discount on the ticket with our code: INDEVELOPMENT-16X.

Ticket holders can apply to take part in script labs, a writers room experience, pitch to execs and have an actors' table read of a section of script, on top of the three days of sessions. Speakers this year include; Jim Uhls, screenwriter of 90s classic, FIGHT CLUB, Andrew Macdonald co-founder of DNA and producer of Britain's own 90s classic; TRAINSPOTTING and Freddie Highmore; the star of BATES MOTEL, who also writes for the show.

Perhaps I’ll see you there.
Posted by In Development at 06:04