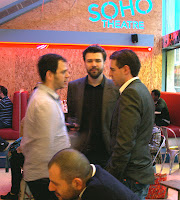 If you’re a script editor or development person who also writes then April’s featured guest, Jon Croker, is certainly someone to meet. Jon worked for a number of years as Story Editor at the Film Council, on titles including The Iron Lady, Attack The Block and The Woman in Black. However, he was previously a writer too and since leaving the Film Council has made the transition into screenwriting full time. During April, Variety announced Jon as the writer of the sequel to The Woman in Black, (‘the most successful British horror of all time' The Guardian). We thought we’d invite him to join us and share his experiences on the project and how he made this transition.

Jon told us that he was asked to pitch his approach to the sequel, along with other writers, but the fact that he and the producing team were already comfortable discussing the material together in development terms could not have hurt his case. Obviously everyone wants a writer who understands and is adaptable to the development process, so this is potentially an advantage to us two-hat wearing types.

Jon also told us about an improvised thriller feature he’s been working on recently, In Fear. He was on set each day with the director providing scenarios to actors who had no idea what was going to happen next! He would then work up material that night in reaction to what was improvised. Certainly sounded like good fun, so look out for that.

April's drinks brought another packed evening, with an excellent crowd of development folk to chat with. This included our featured guest for March, Jamie Wolpert; script consultant Marilyn Milgrom, recently back from a four year stint as Head of Development at the New Zealand Film Commission; feature film director/producer Neil Thompson of Formosa Films, who just secured SEIS funding to develop another three features; film director/producer Justin Edgar of 104 Films, currently editing his latest feature We Are The Freaks; director/producer Peter Chipping; script consultant Ellin Stein; development producer Steven Russell of Loves Me Not Films; script editor Lauren Cushman; production co-ordinator Laura Park, currently working on the new series of The Thick of It and down from Birmingham, multiple hat wearing, writer/director/producer, Brendan O’Neill of Stickleback Productions, to name but a few.

At the time of our drinks Jon was already well into the first draft of the sequel, titled; The Woman in Black – Angels of Death. Now he is one of our In Development clan, we hope he has a chance to join us for drinks in the future and look forward to hearing more about  this and other projects.

Thanks very much to Jon for being April's featured guest – a writer and developer with plenty of experience and insight to share!

Thanks very much also to director/writer Paul Henry for April’s photographs.

NB - As ever, if you'd like to be a featured guest or can introduce us to someone who you feel would make a great featured guest, please do let us know.